The Hawks have begun this season, as many predicted, struggling out the gate. Many projected this season as a year of development for the Hawks franchise and that looks to be the case. The Hawks went from the 3rd oldest team in the NBA last season to 16th this season. If you remove the one year deals to Illyasova and Bellineli, the average age of the hawks drops an additional almost 2 years to just under 25 which would put them 24th. The focus since new GM Schlenk arrived has been to create cap flexibility and add young talent to an aging roster. So far, so good.
One of the pleasant surprises for Hawks fans has been the emergence of Schroeder as a leader on the court. He is averaging career highs across the board from shooting % to steals and assists. At 24, this is the developmental step Hawks management was hoping to see from Schroeder this year, and gives them a valuable young piece moving forward. Add to it the continued development of Taurean Prince and athletic rookie John Collins, and the Hawks have some intriguing, albeit raw, young players on their roster today.
To start this off, let’s first take a look at the current Hawks players and contracts on the books:

Above you can see that in this chart I have already added in projected salaries for rookies drafted this year. The Hawks very well could end up with 3 1st round picks in this years draft. “Rookie 1” being the Hawks pick using their own draft choice. I project it to be a top 3 pick as of November, hence the large salary. The main reason for the above chart is to give us an idea of what positions on the roster will need to see an influx of talent over the next 2 years to build a rounded team. Below is a look at players under contract over the next 3 years by position (Note: I ignored Jamal Crawford and Richard Jefferson who are on the cap next season, but not the playing roster):

As you can see from the chart to the right, the Hawks will need players across the board, however Center is the one pressing position where there isn’t a young developmental player on the roster yet. Depending on how the next two seasons go, the Hawks have left themselves options to free up additional cap space in the 2019/20 season should development warrant adding in big time free agency help. That only matters, though, if the Hawks can nail this coming draft and their development targets over the next 2 years.
To recap, here is a quick look at what first round draft picks (and protection) the Hawks have this year:
The Hawks did a good job adding assets for this year’s draft. Many draft pundits have touted this draft as possibly even better than last years strong draft class. Right now, most scouts (at least that this writers has found) have 4 prospects as potential franchise players. With the Hawks looking more and more like a top 3 selection, the odds are looking high the Hawks will have the opportunity to land one of these marquee players. The bigger question turns into now for the Hawks is how to avoid drafting another Marvin Williams (The last top 5 pick of the Hawks, selected #2 overall in 2005)

Now without further ado, we will take a look at a couple of the high end prospects the Hawks should have a chance at this year, as well as some later sleeper picks the Hawks will have a chance to pickup on as well. Let’s dive into the Hawks Big Board for the 1st round of the 2018 NBA draft:

Note: Next week I’ll cover the two back end picks for the Hawks, check back here for updated link

#3 Overall Pick
3. Tie : Marvin Bagley III & Luke Doncic
This came down to a tie for me. Before this week, Michael Porter Jr would of probably edged this out based on athleticism and availability of scouting information. With the injury to Porter Jr’s back, I had to swap Porter Jr with Bagley. The Hawks can ill afford to miss this pick and a serious back injury at 18 is too risky for my blood. Doncic, on the other hand, has been really impressive at the top of the Euroleague while only being 17. Bagley projects more as a PF where the Hawks just drafted John Collins, but his talents deserved consideration. 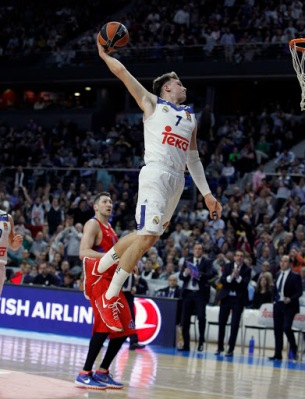 Luke Doncic is an 18 year old prospect playing for Real Madrid in Spain this year (previously spent time with Slòvēnija). He’s very skilled for his age from growing up on a basketball court around professional players. His father also played for Slòvēnija during their 2008 title run.
(Pictured below is a 9 year old Doncic wearing the gold medal after his father won the league championship in 2008.)

Doncic has great size for a wing forward (6’8 220), enough handles and vision to play guard, while also possessing an uncanny court intelligence for his age. Doncic is already ahead of most of this draft class in terms of NBA readiness. As with all rookies, he’ll take some time to adjust to the size and speed of the NBA, but at 18 (and a year already competing with Real Madrid at the top of Eurobasket), he has plenty of time for even further refining his game. He shows a high competitive spirit and a good motor in the little scouting video available. Some scouts have him as high as #1 overall in this years draft. That would make him only the 3rd international player all time to go #1 overall and not attend a US university (Yao Ming & Andrea Bargnani).

Marvin Bagley III is one of the most intriguing prospects in this coming draft. First, he is a year ahead of his fellow class mates after deciding to enter college early. Second he’s started this basketball season for Duke looking like the best player in the country. He’s 6’11 yet moves like a wing player. He’s not the longest or biggest athlete in the draft, but he very may well be the most athletic and polished scoring big this year. He has a solid post moves and really smooth feet in the paint. Gives fantastic effort on the glass and is really quick getting off the floor allowing him to beat longer guys when fighting for rebounds.

Marvin Bagley is the most fluid looking big man in the draft this year. When asked about his game he told CBS Sports Reid Forgave,
“I look at K.D. a lot. Like I said Giannis. Those are guys that can do it all on the court for their size. They get the ball at the rim, go, push. Just shoot it. Get their teammates involved. So I try to study their games, not to be exactly like them, but just to be somewhat like it where I can know when I get the rebound push it fast [and do] little smart things like that.”
With his size, speed, and natural fluidity, he has the tools to develop into the kind of all around player in the mold of a KD and Giannis. That is one high ceiling. Given his effort and natural rebounding ability he also has a low floor as an impact 4 who could give you a double double every night. He needs development still as a shooter in today’s pick n roll NBA if he wants to have the kind of impact that players like Giannis and KD have on the game. The only thing really holding Bagley from moving up on the board is he is a forward and the Hawks have spent 1st round picks on forwards the last 2 seasons.

DeAndre Ayton, is a generational big during a draft where there are two generational type big men. Here is a guy with excellent speed and fluidity all while standing 7′ and coming in at around 250lbs. He’s very polished offensively for his age and size. He may be one of the best 7 footers coming into the NBA in history. That’s certainly a tall order, but here’s a guy coming into the NBA showing great feet in setting screens while possessing the ability to catch and shoot or catch a lob with his 7′ 5 wingspan.

Here is Ayton against UNLV to start the game. He sets a good screen and steps back for what usually isn’t an easy pick n pop for a 7 footer. That is unless you’re Ayton. Watching Ayton it is quite obvious he is a very talented and agile big man. However, his defensive presence is still a work in progress. His motor consistency is also a work in progress as he can seem to settle and be complacent at times. He’s great on the boards, but he doesn’t have the real nitty gritty type attitude needed to really bang in the paint in the NBA (at least in this writers opinion). This is ultimately why I went with….

Mohamed Bamba (7′ 225) is a long (7’9 wingspan), athletic center for the Texas Longhorns this year. When you think of today’s prototypical big, Bamba looks to check off every box. Here is a long, rangy big whose length will force tough shots in the paint, but when added to his surprisingly fluid and quick feet for his size, he also has the ability to close out and defend the perimeter. He shows all the tools to develop on the offensive in, and all the intangibles you look for in a corner stone type player.

Bamba is already the best defender and rebounder in this draft. Those are two skills that easily translate into the pro’s. The other big thing is his demeanor. The way he carries himself off the court and presence of mind he shows at 19 is admirable and humbling. You can see the difference in the interview here with Bamba and Ayton. For an added bonus Bomba is also undefeated against Ayton. You also hear them mention how much of a talker he is on the court. That’s the edge the Hawks needs in the paint.

Combine all this with the agility, size, and tough demeanor (from growing up playing in Harlem) Bamba checks off boxes that you can’t coach while showing all the potential for what you can. This is the kind of talent Bud could mold into a generational big with the defensive talent and maturity to impact the game early.

What’s your pick for the Hawks? Leave an answer below!