Yesterday, I wrote a piece on several players who are pitfalls and should be avoided. Today I am going to take a look at several guys who are currently being drafted low relative to potential and likely production. All ADP’s are provided by fantasypros.com. Based on standard scoring leagues. If you’re looking for a more in depth list of Booms and Busts, check this article listing booms and busts by team by my fellow TOSS writer Stephen (pronounced Stee-fin).

How Marvin Jones is getting drafted so late is shocking to me. Jones has basically had 1k yards the last 2 seasons, and since moving to Detroit has started to put up real touchdown production on top of the yards. Mathew Stafford is still there and they are looking to add to the defensive side of the ball. The addition of  Blount shows Matt Patricia is going to commit to the run more so than the Lions have before, but with Tate, they will still exercise the talent they have at all the skill positions. Jones was a top 5 fantasy receiver last year, and while I do not think he will be again this season, I do think he is a top 15 receiver with top 10 upside. If he’s sitting around in the 5th round, don’t be afraid to take him. 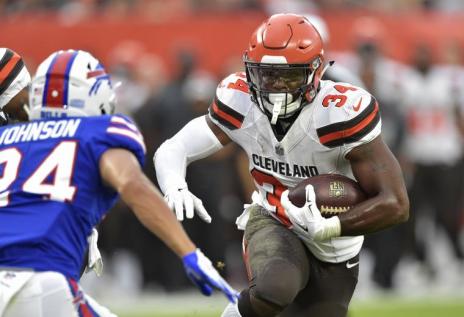 Carlos Hyde has been a starting fantasy running back every season he has played in the NFL. Here is a guy who is capable of 1200 rushing yards, 300 receiving yards, and double digit touchdowns, but is being drafted like a flex play. Cleveland’s offensive line will be a bit of a struggle to start, but don’t sleep on Hyde’s ability behind a bad line. In San Francisco he wasn’t exactly playing behind a top flight NFL unit. However, he was still capable of putting up starting numbers. Hugh Jackson isn’t a coach who will abandon the run and wants to keep balance this year. The addition of Tyrod Taylor will create wrinkles in the run game Hyde should be able to exploit.

Here we have another case of history just not matching draft position. Maybe it is peoples perception of these guys, but how they fall behind their statistical production is surprising and interesting psychology experiment I’m sure. Tevin Coleman has several things to his advantage. First Freeman has had concussion issues, so it’s not far-fetched to see Coleman starting several games. Coleman is also going into a contract season, and we are going to see him make the best use of any opportunities he gets. The offensive line in Atlanta is a good unit, and he has chemistry here. I wouldn’t quite call Coleman a starting fantasy RB, but he would be the first line off the bench and match-up play (due to previously mentioned injuries or teams weak covering running back in the passing game). Most likely finishes top 20 RB but production will swing requiring playing him at the right times.

This one is really surprising. Watkins has had injury issues before certainly, but he is easily a top 10 talent going into an Andy Reid system. Last year, he was traded to a new team at the end of off-season and never really fully adjusted, but you seen the flashes. In 2015, his last healthy season prior to last year, he was a top 15 receiver in the NFL. He’s still young and going to a system that has talent all around him and a big arm QB. Add the offensive minded coach who has a proven track record with receivers, and I love the upside for an 8th round pick.

Recent history hasn’t been super pleasant to Cobb, but it isn’t like he hasn’t had his days in Green Bay. He’s just now 28 and he’s going into a contract season. All the hype and attention has been on Adams going into this off-season as him and Rodgers continue to build chemistry. Cobb has been almost forgotten about in his prime. Contract year + Prime Age + Familiarity = Big Season. This is the season Cobb has a chance to earn his big contract whether it be with Green Bay or someone else. Rodgers is going to need all his weapons to overcome a weak offensive line unit and Cobb is a trusted source with extra motivation to put up big numbers this season. Drafted like the 4th best receiver who I wouldn’t be surprised to see starting in every fantasy league by years end.