Now that the regular season is coming to a close it’s time to recognize who should be up for the many awards for the 2018 season.  I’ve began by looking at both the AL and NL MVP candidates.  I won’t look too hard into the Silver Slugger or Gold Glove categories but one area I can talk about is the Rookie of the Year conversation.

Both the NL and AL award players for being outstanding rookies and I’d like to break down the conversation for you.

Juan Soto, Ronald Acuna Jr, Brian Anderson, and Jack Flaherty all highlight the Rookie class for the NL in 2018.  Brian Anderson leads the NL rookies in hits with 150, Jack Flaherty leads the NL Rookie Pitchers with an 8-7 record, 168 SO to 138.1 IP, with an ERA of 2.86, and Juan Soto leads the NL rookies in RBI (64) and AVG (.302).  All 3 have had stellar seasons for their clubs but no rookie has been the most destructive as Ronald Acuna Jr.

The AL has seen stellar seasons from guys like Lou Trivino, Ryan Yarbrough, Shane Beiber from the mound and Joey Wendle, Niko Goodrum, Daniel Palka, and Gleybor Torres at the plate.  Let’s not forget that this award was basically Shohei Ohtani’s before an elbow injury derailed his season.  The race has been quite close with both Torres and Andujar but since September rolled around, the favorite has become clear.

Miguel Andujar leads ALL Rookies in Hits (156), Doubles (40), and RBI (83).  He leads the AL rookies in Runs (77), AVG (.398), SLG (.519), and OPS (.851).  He’s also tied for 1st in HR with Daniel Palka hitting 24 bombs.  Just by looking at the top of the statistical categories it is obvious Andujar should take home the ROTY.  Whether he benefits greatly from hitting in the tremdously loaded New York Yankees lineup shouldn’t matter when he’s producing at such an incredible level as a rookie. 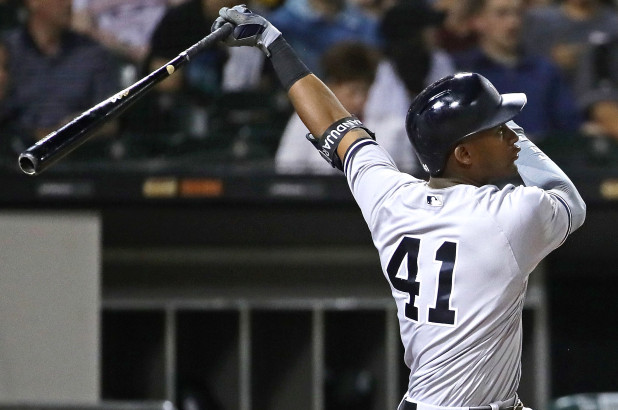 Ronald Acuna Jr and Miquel Andujar are the 1-2 in almost every rookie batting category.  They highlight a rookie class which is producing at a higher level than most rookies I’ve seen recently and many reasons for why the Braves and Yankees are poised to win more games than in 2017.  Their contributions have helped the teams achieve their goals and their presence in the lineup helps the players around them.  It would be a major upset if these 2 didn’t take home the hardware.