Falcons played week 3’s preseason in Jacksonville this week. Week 3 is always the most interesting week to watch to see who starts and how the chemistry goes. Otherwise it’s pretty run of the mill for most teams who want to keep their wrinkles up their sleeve until it matters. This week is the best to gauge real depth for a team and who the coaching staff views as contributors vs fringe roster players.

The Falcons, first and foremost, still look to have a drop issue. This is something to continue to keep an eye on as the Falcons were on of the worst in the league in dropped passes. Both Ridley and Hooper had drops for first downs. Sanu had a drop in the end zone on the Falcoms best scoring chance. Speaking of that chance, the Falcons had a 4th and 1 inside the 20. I wish Quinn would of gone for this as it is a good time to measure up the team. There is no real loss here either way, but you can see if your OL can get push if called upon to give you 1 yard.

Beyond running the ball, another key takeaway is Deion Jones impact at MLB. Duke Riley struggled owning that role (picked up valuable experience) and it will be a major loss if Jones was to miss significant time. His leadership, speed and instincts are important to keeping the Falcons defense on point and ready for the like of Drew Brees, Cam Newton, and company.
Oliver also continues to struggle jamming receivers at the line. He played a lot more zone in college and it’s still clear he is not using is hands and length to his advantage in man coverage. This week he was beat on a slant route where he barely jammed the receiver, but did so back peddling creating zero disruption in timing. When you don’t jam and turn the wrong way in man coverage, these turn into 30 yard gains in the NFL. Oliver is young and this is a good learning experience. Outside this, he looks smooth and fluid in coverage for his size. 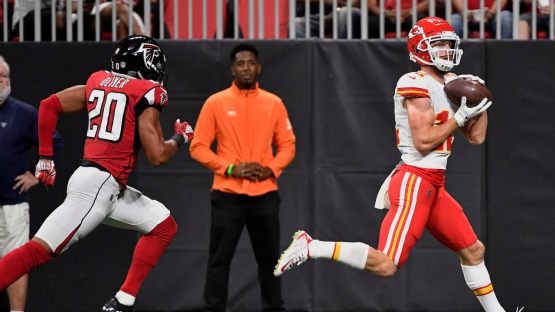 The defense is ball hawking. They came away with an interception early which was really key in keeping the game close. The offense struggled to move the ball on their 3 drives after the opening drive, and this wore the defense down as the half wore on. Defensive backs look really deep on the Falcons team. Kazee made plays all over the field filling in for Rico. I am a firm believer the best nickel look has Kazee at FS and Rico at nickel back.

Russel Gage and Foyesade Oluokun are earning their roster spots and should help improve what was a weak special teams coverage unit last year. The DL was a question mark coming into the preseason and this looks deep. The pass rush is still am area to watch as Beasley tries to prove hes not a 1 year wonder and McKinnely tries to earn his place in the league.

The Final Verdict : The preseason confirmed what many think. This Falcons team is fast and has depth across most the roster. It isn’t perfect and there are areas the Falcons will need some health luck to stay a super bowl contender. However this is no different than any other team.